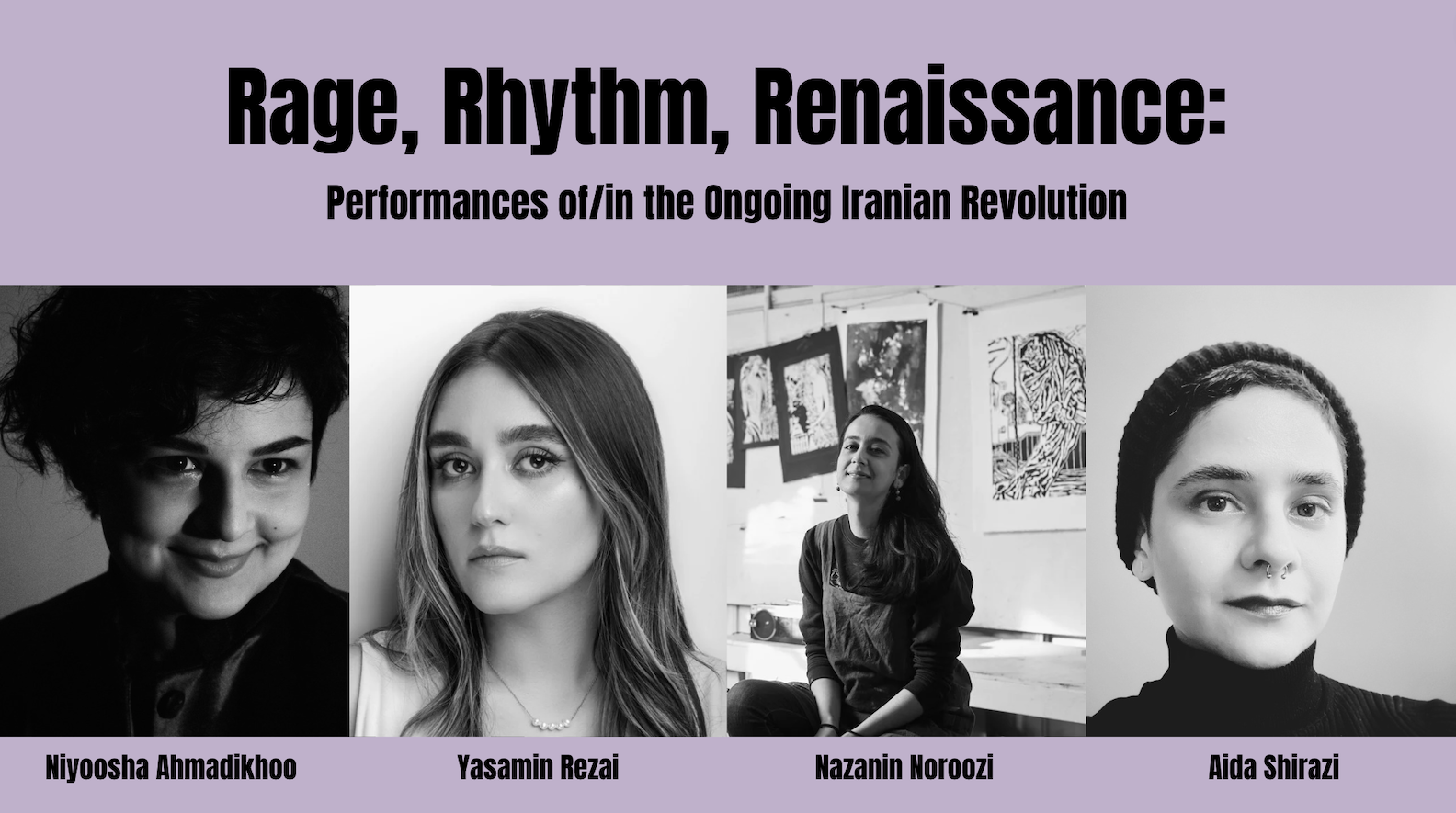 The panel will discuss how Iranian youth, particularly women, are transforming everyday activities into performative manifestations of rebellion as they lead the current Iranian revolution. Using their expertise, each panelist outlines different aspects of the phenomenon, illustrating how performance has been a critical driving force in this revolt. Yasamin will explore the relationality of the body and the urban space; and how women, whose bodies have been restricted and objectified by mandatory hijab laws, are now reclaiming the city through their simple and brave gestures of disobedience. Aida will discuss the role music has played in this uprising and the ephemeral sounds of the revolution. Nazanin will examine the performance practices developed and placed at universities around the country, as well as the dialogue between campuses and the streets.

This event is open to the general public. Reserving a ticket in advance is REQUIRED. Please use the event link above to book a ticket before 4pm of the day of the event.

All guests will be required to show a goverment ID and proof of vaccination at the door. More information on NYU's Guest Policies can be found here.

This event will also be available as a webinar on zoom.

Niyoosha Ahmadikhoo (she/they) is a transdisciplinary scholar and artist based in NYC who explores discourses around displacement and identity. She earned a MA in Performance Studies from New York University (2017), and a MS in Mechanical Engineering from University at Buffalo (2016). Her last performance at the Invisible Dog Art Center, Neurodivergent Pickling, was featured in Nafas exhibition in Brooklyn, NY. Apart from Performances of the Iranian Revolution, Niyoosha is also working on two other research projects: Data Performance and Afro-Iranian Performance.

Nazanin Noroozi is a multimedia artist incorporating moving images, printmaking and alternative photography processes to reflect on notions of collective memory, displacement and uncertainty. Noroozi’s work has been widely exhibited internationally, including the Immigrant Artist Biennial, Noyes Museum of Art, NY Live Arts, Prizm Art Fair, and Columbia University. She is the recipient of awards and fellowships New York Foundation for the Arts Fellowship (film & video), Marabeth Cohen-Tyler Fellowship at Dieu Donne’, Elizabeth Foundation for the Arts, and Mass MoCA residency (MA). She is an editor at large of Kaarnamaa, a Journal of Art History and Criticism. Noroozi completed her MFA in painting and drawing from Pratt Institute. Her works have been featured in various publications and media including BBC News Persian, Elephant Magazine, Financial Times, and Brooklyn Rail.

Yasamin Rezai (she/they/او) is a polyglot actor, social media scholar and Ph.D. candidate in the Department of Modern Languages and Literatures (MLL) at the University of Miami. Her academic work is focused on the intersection of New Media Studies and Performance Studies and employing Digital Humanities tools and data-driven approaches. Her research is focused on instapoetry, data culture and justice, online activism, especially #metoo in Iran. She is the co-founder of Instasociety.org, an open-access research resource exploring how social media changes popular culture. Yasamin’s works have appeared in Digital Humanities Quarterly and Critical Studies in Media Communication, and her research was presented at conferences by Cultural Studies Association and Modern Languages Association.