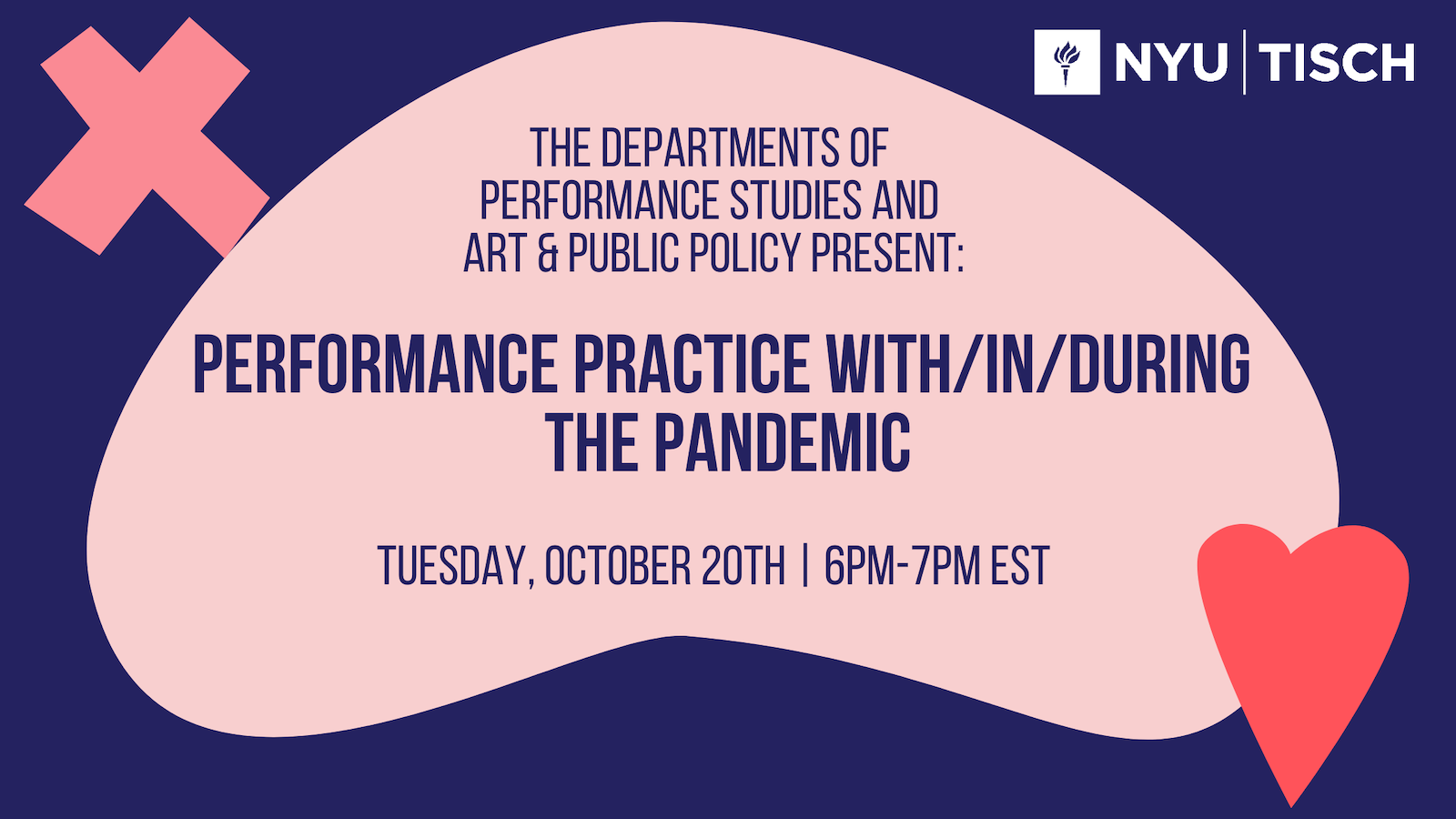 Register for this event!

For Tisch's Week of Community, the Departments of Performance Studies and Art & Public Policy are gathering artists to discuss how they are creating, performing, and enacting during this pandemic. Is solo work the foreseeable future of performance? How might one work within and beyond the solo form? What other possibilities might exist? Speakers who work across genres from theater, performance art, dance, and drag will discuss their respective practices today; and we hope to have a larger conversation together about the future of performance!

Kristel Baldoz: Kristel is a Filipina-American artist from Delano, California, home to the Table Grape Strike. She was a 2019 EmergeNYC fellow at the Hemispheric Institute, artist-in-residence at the Jonah Bokaer Arts Foundation, and recipient of the 2020/2021 Brooklyn Art Exchange Space Grant. As a performer, she has worked with Reggie Wilson, Wilmer Wilson IV, and Alex Da Corte. As an arts administrator, she project managed for Faustin Linyekula and assisted Anna Deveare Smith. Kristel creates performances as a form of abstract storytelling by merging movement with improvisation, text, and family history. Drawing from experimental and Philippine traditional dances, sculpture, visual installations, and her family’s personal stories, she aims to uncover generational histories to reveal the deep-seated politics embedded inside individual experiences.

Eleonora Fabião: Eleonora is a performance artist and theorist. She has been performing, lecturing, teaching and publishing internationally. Her performative actions have been enacted in several contexts – dance and theater festivals, art exhibitions, museums, sociocultural projects – and, mainly, in the streets of many cities. Things That Must Be Done Series (Wall Street, 2015) is the title of a work and, also, a way of referring to her artistic practice. She is a Professor at the Federal University of Rio de Janeiro, School of Communication – Theater Directing Undergraduate Program and Arts of the Scene Graduate Program. She Holds an MA and a PhD in Performance Studies (NYU), and an MA in Social History of Culture (PUC-Rio). In 2014 she received the Rumos Itaú Cultural Grant that resulted in the publication of the book AÇÕES/ACTIONS Eleonora Fabião (Tamanduá Arte, 2015). Institutions where she taught as visiting professor include: Department of Performance Studies NYU, Freie Universitat Berlin, UNA Buenos Aires, MoMA NY, Norwegian Theatre Academy, Stockholm University of the Arts, Máster in Práctica Escénica y Cultura Visual Universidad Castilla-La Mancha, Amsterdam University of the Arts. Fabião is a Researcher Level-2 of the Brazilian National Council for Scientific and Technological Development (CNPq). She is an invited artist of the 34ª São Paulo Biannual.

Harris Kornstein: Harris is a visual artist, drag queen, and PhD candidate in Media, Culture, and Communication at NYU, whose work focuses broadly on digital culture, media art/activism, and queer theory.  As drag queen alter ego, Harris has helped lead the #MyNameIs campaign against Facebook's so-called "real names" policy, is one of the forces behind Drag Queen Story Hour, and has performed everywhere from San Francisco's legendary worker-owned bar The Stud to the SF Museum of Modern Art and Saturday Night Live.  Harris's visual work has been exhibited at venues like the International Symposium on Electronic Art and MIX NYC, and their writing has appeared in Surveillance & Society, The Guardian, Wired, and Salon, among others.

Eva Reyes: Originally from South-Central Los Angeles, Eva Margarita explores the socio-political environments that bloom the Afro-Latinx subject. Peering into performances of everyday life, she is particularly compelled to explore how race spills over, beyond categorical constraints. Eva Margarita’s work is guided by principle that practices of the rituals of everyday life offer an alternate way of existing; one that acknowledges the familial, spiritual, and scholarly forces available for layering logics of gathering. Her performances works conjure immaterial and material resources to weaponize interdisciplinary ways animating life. Additionally, Eva Margarita is a recent alum of the NYU Performance Studies graduate program and is currently enrolled in doctoral studies at the University of Texas at Austin.