Tisch School of the Arts Map it 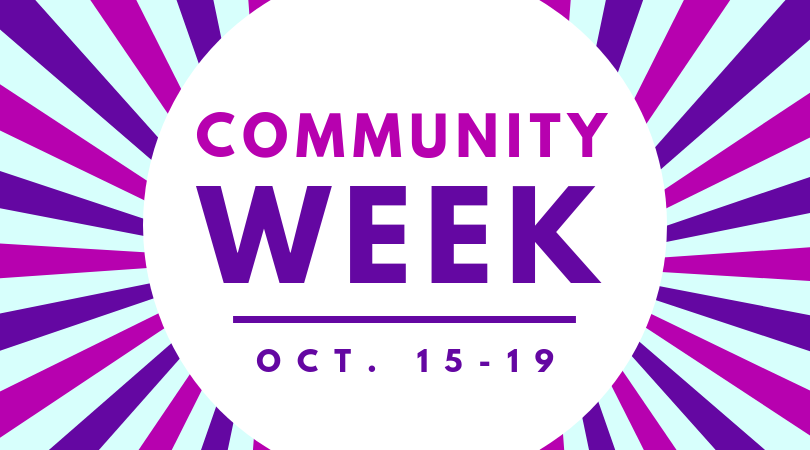 Each October, more than 1,700 members of the Tisch Drama Community—faculty, students, and staff across the department’s 10 training studios and theatre studies program—come together to build relationships with new and existing communities as part of the Tisch School's annual Community Week, October 15-19.

Throughout the week and on Community Day (Oct. 19), the department’s training studios will host an exciting array of activities and discussions reflective of the topic of community. The line-up includes class exercises, a series of staged readings, ensemble workshops, community lunches, and other events. Here’s just a sample:

The Atlantic Acting School will divide and combine its students into nine sections, representing each of the studio’s three years of programming. The studio will also hold a 90-minute "intergenerational" improv-based class, facilitated by various faculty, to build relationships and strengthen the ensemble within its studio community.

On October 19, members of the Classical Studio will have lunch together and partake in a public discourse and debate exercise. Following that, Tim Carroll, artistic director of the Shaw Festival, will host an ensemble acting workshop.

On October 19—as a continued collaboration with ETW, Open Arts, and NYC PS3—students will connect at Tisch for a morning together. Following, first-year students will travel to a Lower East Side public school to share artistic inspirations. Additionally, as a longstanding studio tradition, ETW students and faculty will gather together for a full day of community celebration on October 26, where they will share work, stories, songs, and more.

Instructors at the Lee Strasberg Theatre & Film Institute will highlight themes and discussions of “community” in their NYU classes. Additionally, second-year students will perform a reading reflective of the topic from a series of plays on climate change titled “Climate Change Theatre Action.” The reading will be held at 7 p.m. on October 19 in the Marilyn Monroe Theatre at the Lee Strasberg Theatre & Film Institute, located at 115 E. 15th St.

On October 19, the Meisner Studio will host an early morning breakfast for its community to come together. Following, members will divide into groups of seven or eight, comprised of faculty, staff, and students of various class years. Groups will be given prompts around the topic of community such as "My struggle with community is..," "My hope around community is..," etc. Members will then write down their responses anonymously, which will be retrieved for an open discussion.

First-year students in Tisch Drama’s New Studio on Broadway will go out into the community to observe someone in detail—an exercise intended to encourage an outward focus. In second-year movement classes, students will reflect on the breath as a vital, fundamental process, which connects them to the earth and enables them to offer themselves through song, speech, and movement. In voice classes, students will ask others in the local community what they believe is the difference between "living" and "existing.” The class will then share answers on October 19, engendering a community discussion. In second-year Tango classes, students will discuss how dance brings people and communities together of every age, gender, race, and background. Lastly, on October. 30, first- and second-year students will hold a bake sale from 4–6 p.m. in the Tisch lobby benefiting those affected by Hurricane Florence.

Using the song "If Not Now, When"—written by Tisch Drama alumna Shania Taub '09—as the source of inspiration, Playwrights Horizons students will write and devise a series of short plays that explore and reflect current political policy and their impact on America's younger generation.

Tisch Drama’s Production & Design Studio will host a community "stone soup" lunch, based on a 1947 World War II tale in which villagers contributed ingredients into a pot of stones, piece by piece, turning it into a wonderful community meal. Likewise, students will bring ingredients for a soup lunch that they will cook and share together on October 19.

The Stella Adler Studio of Acting

The Stella Adler Studio of Acting’s fourth-year company of students will perform the two Shakespeare plays that they will be touring in New York City schools, prisons, and underserved communities beginning the following week. Additionally, on October 16, the David Oppenheim Music Center will present a concert performed by American composer, conductor, instrumentalist, and author David Amram celebrating immigrant culture. This event will be held at 7 p.m. in the studio, and is free and open to the public.

Leading up to Community Day, Stonestreet Studios will have a voter registration station set up for students. And on October 19, the studio will have multiple stations set up, including two screening areas—one featuring a screening of productions made my members of the Stonestreet community, and another of the film Show Up by James Morrison, about actors in relation to the business—as well as bins for socks to be collected for Tisch Drama’s Artists in Activism sock drive, computer stations to help students find their voting location, and a photobooth station for students to create clips encouraging others to vote.