This fall Tisch Students were asked to produce voter engagement-focused public service announcements (PSAs) in the form of a filmed segment, animation, recorded monologue, photo, game, or jingle! This contest was held with the aim of starting peer-to-peer conversations around the importance of youth voter turnout.

Entries from across Tisch departments were reviewed by a panel of students from the Tisch Undergraduate Student Council (TUSC) and the Tisch Graduate Student Organization (GSO). Each project was ranked based on criteria put forward by the TSOA NYU Votes Committee. Winning entries spanned from jingles on registering and casting your vote to how-to videos and pieces debating the fundamental questions of why we should vote and does your vote matter. Check them out below and follow up by formulating a voting plan and casting your vote on or before November 3rd!

Why Your Vote Actually Matters
By Ava Emilione, Film and Television

This PSA seeks to answer the question "Why does your vote actually matter?" through the lives of four women of color. Although the women share different backgrounds, languages, and perspectives, they are joined through how their livelihoods are dependent on a vote. For many Americans, a vote is so much more than a simple ballot— it is the difference between hunger and food, a dream career and poverty, or even life and death.

Why Your Vote Actually Matters

Get Up and Vote!
By Sara Gordon, Undergraduate Drama

A song on acoustic guitar that describes the importance of young voters participating in the election.

Get Up and Vote!

Voting is the Answer
By Chelby Joseph, Dramatic Writing

Some questions don’t have answers, but when it comes to whether or not you can make a difference? The answer is always, of course. 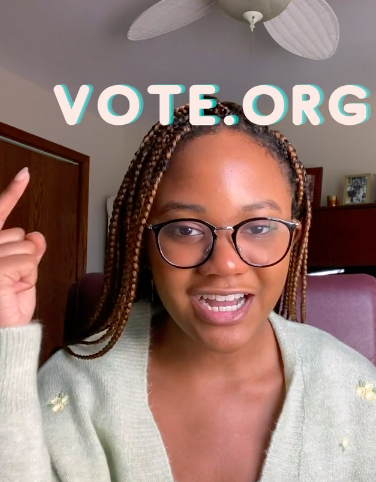 Voting is the Answer

Animated PSA showing you four ways you can return your ballot!

A short clip encouraging students at NYU to vote.