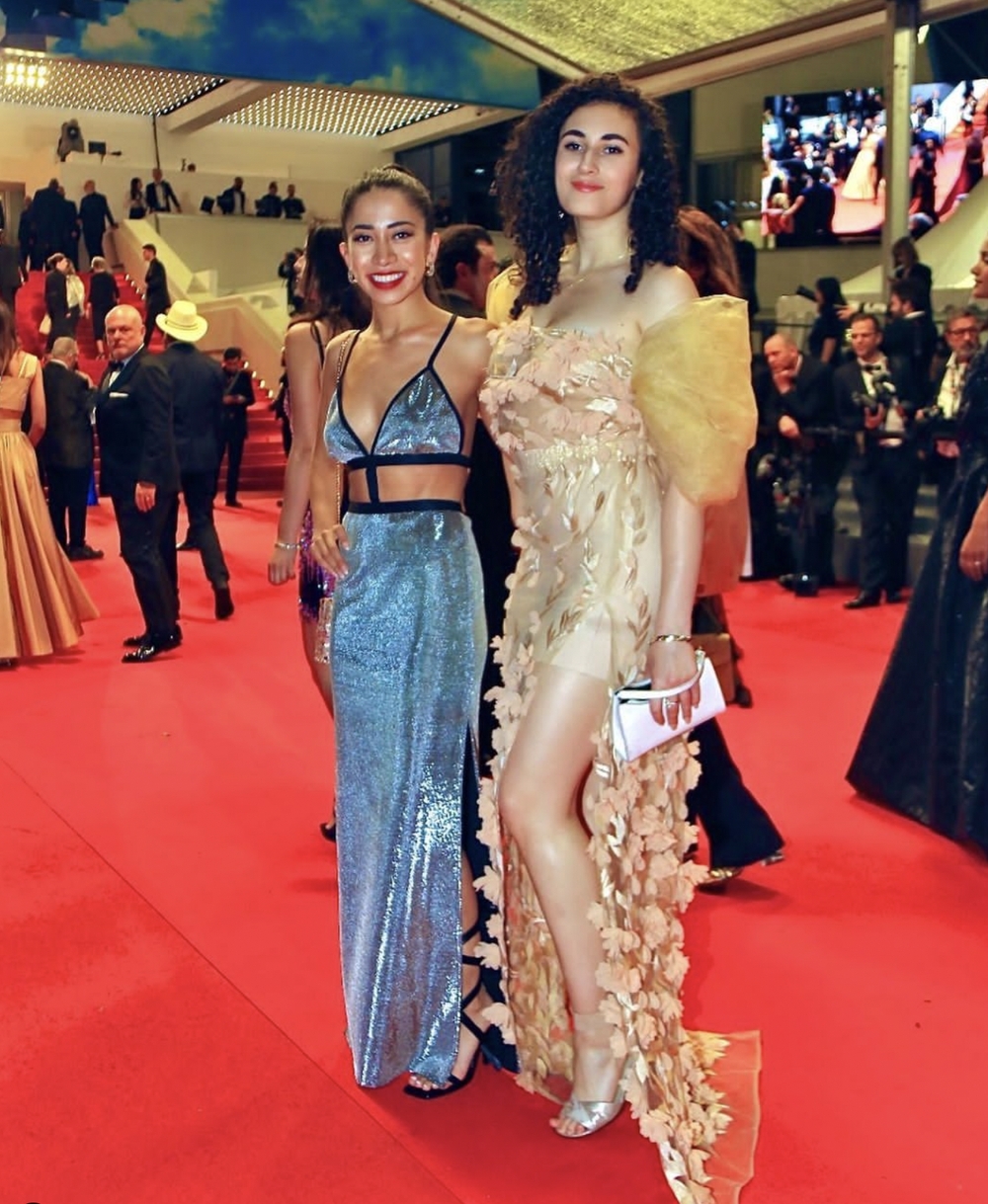 Maya Moravec and Izzie Nadah at the 2022 Cannes Film Festival

Years before ever crossing paths in Tisch’s Department of Drama, Maya Moravec ‘22 (BFA, Drama) and Izzie Nadah ‘22 (BFA, Drama) scanned film and television programs in search of characters who reflected their lived experiences—a parallel process that left them similarly disheartened. Moravec, who was born in Guatemala and adopted by a Black mother and white father, felt alienated observing a media landscape bereft of multiracial identities and experiences. Nadah, a first-generation Arab American raised in Minnesota, was effectively shut out by mainstream media and its lack of representation of Arab women.

“I got confused by some of the messaging I was receiving in the media,” Nadah says. “I definitely didn't have any role models that I was looking at [in film and television].”

Nadah and Moravec originally met in primary training at the Experimental Theatre Wing, but with pandemic restrictions forcing their Drama courses into the virtual space, the pair found themselves charting similar paths towards film production. They reunited while serving as interns at the same production company and later began tossing around the idea—if only facetiously at first—of starting their own production company.

“We were doing a lot of work with this production company and we were really understanding the process and were kind of good at it,” Nadah says. Maybe we can do this on our own, she thought. When Moravec expressed a matched interest, the team quickly got to work.

In the summer of 2021, Moravec and Nadah founded One & Other Productions, a multimedia narrative production company focused on producing stories which inclusively illuminate the significance of multicultural identities. The company currently has more than 16 projects in different stages of production, and their inaugural production Mirage, directed by Tisch student Elizabeth S. Acevedo, recently premiered in the Short Film Corner at The 75th Cannes Film Festival in May. Both Moravec and Nadah traveled to Cannes on behalf of One & Other Productions, which was named an officially accredited company of the festival.

In a recent conversation, the Tisch alumni discussed their nontraditional route to film production, how they plan to spearhead better representation in the industry, and what to keep an eye out for down the road.

How do two Drama students arrive at starting a production company? What were the budding conversations like?

Izzie Nadah: During the pandemic it’s been hard to [perform and act] in a fulfilling way. I found myself not being able to scratch that itch so much with Zoom theater. I ended up personally kind of diving into the minor that I'd had since freshman year, which was producing. Originally I started that because I wanted to know more about the business I'm in, but of course I’m still an actor. But then Maya and I both got the same position as production development interns.
Personally, I know I felt like that was just such a valuable experience. Coming out of it, I started joking with Maya, like, “So when are we starting our own production company?” [laughs] I was joking, but I really wanted it to happen, and I was overjoyed when she was responding that we’re going to do this.

Maya Moravec: Your mention of us both being drama students… I think it's definitely notable that Izzie and I were in primary training together. We were in the experimental theatre wing for those two first years which really makes a bit of a name for itself in that it's a “rolling-on-the-floor studio” and it's this very abstract studio. At the end of the day, one of the things that they instilled in us was the idea of self-starting—going off for 15 minutes, creating a piece, and then coming back with it.

I will tell you it is definitely surprising to film students whenever we're on set. And we do make a point on most of our sets to have NYU crew members and as many female crew members and people of color as possible.

The company is focused on breathing life into stories about intersectional identity. Thinking back on your upbringings, what do you recall about representation in media and the arts and how did that inform your mission here?

Izzie: My dad is an immigrant. He was born and raised in Cairo and came to the U.S. when he was an adolescent with his family and he moved to Minnesota where my mom is from. My mom is white, as are a significant amount of the people in Minnesota. And so I grew up very alienated from my Arab culture. I didn't have words for what that separation and that alienation was. And I got confused by some of the messaging I was receiving in the media. Can you think of a single Arab female celebrity? I definitely didn't have any role models that I was looking at and being like, “Oh that's a successful Arab woman; that's what that looks like.”

And there was nothing really more to it. But then I got to college and I realized there’s more here.. there's more for me to learn about myself and my relationship with my identity. It's been a balance, because the last thing I want to do is feel like I’m fetishizing myself or a culture. But I have found it personally really rewarding to be able to do that kind of investigatory work with myself and the media I engage in.

Maya: My sister and I were both adopted from Guatemala as babies. And my parents are really extraordinary people. My mom is a genius creative black woman; she owns a stationery store in New York, Chicago, and soon to be Los Angeles. My Dad is white and he's an orthodontist.

A couple years ago I had a bit of an epiphany because I had been looking in the totally wrong places for representation for me in the media—and I still haven't quite found it. But the shift that I made was that I kept on looking for it in Latino culture, [even though] I don't identify with the culture nearly at all. ​​So, the twist that I kind of found a couple years ago was that I didn't identify with a Latino American perspective and media nearly as much as until I found black-ish and I could not believe how much I resonated with the biracial identity.

I still haven't found [exactly] what I'm looking for, and I think Izzie and I are in pursuit of creating something that does get at the two parts of myself that are there. 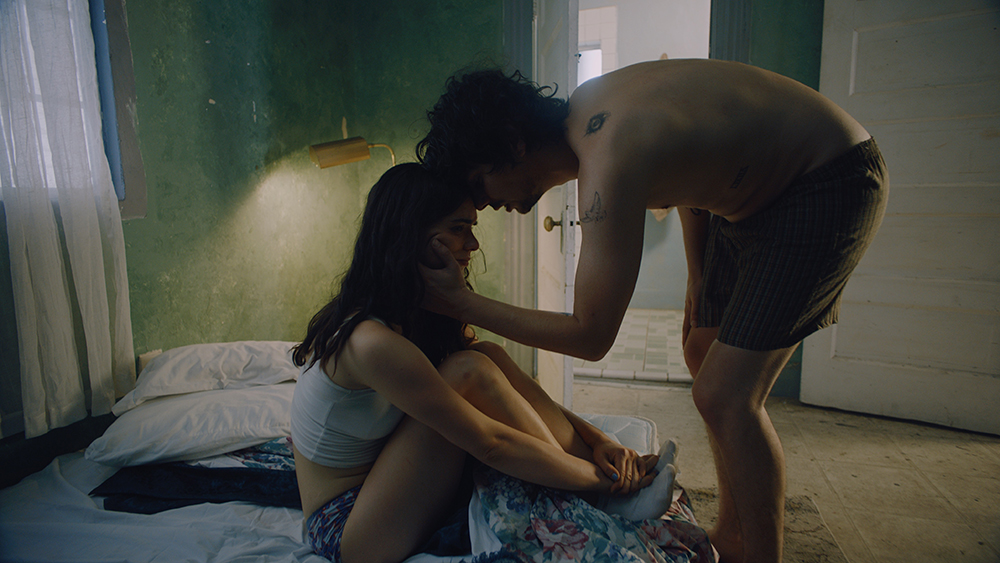 The film Mirage, which was the company’s first production, premiered at Cannes in May. Tell me about how you connected with director Elizabeth S. Acevedo and what that collaboration looked like?

Maya: One of the producers, Daniel Beracha, is a dual degree student, and he was supposed to graduate this year but he's now taken quite a bit of time off to be a development intern at Apple. I was lucky enough to be in a class with him that Al Lieberman teaches every year. Daniel and I were randomly put in a group, together with another student and we really connected in that class. I saw on his instagram one day that he was fundraising for this film called Mirage. I clicked on their Seed&Spark page and I checked it out and it was something that I was very, very drawn to for two primary reasons:

One being that a huge interest of mine is dreams, and this was definitely in the dream memory realm. [And two], the fact that Elizabeth had written the lead to be a Latina. Their team had been working on the project for about a year prior to when I had asked Daniel how I can get involved. They were still looking for producers, they were looking for talent and were looking for a lot of different things—so this became our first production.

From a company perspective, how do you hope to take advantage of your Cannes experience and continue building your network?

Izzie: We're very excited to [attend] Cannes this year with our own accreditation and that our badges [said] One & Other productions. We've had meetings with several of our directors so far, reaching out and asking them what their needs are for the projects as they stand and what they're doing next. We want to bring these amazing successful women of color with us. We work with almost exclusively women directors, and many of them are women of color. And we just find it so valuable to work with the people we're meeting. We want to share whatever successes we have with the collaborators that we value so much.

So we are getting in touch with our directors, finding what their needs are. Some people might need a literary agent; some may be looking for funding for their next script. I see this as kind of starting our streak. I think we will be there every year for the next 30. That's where business happens, and we intend to make business happen.