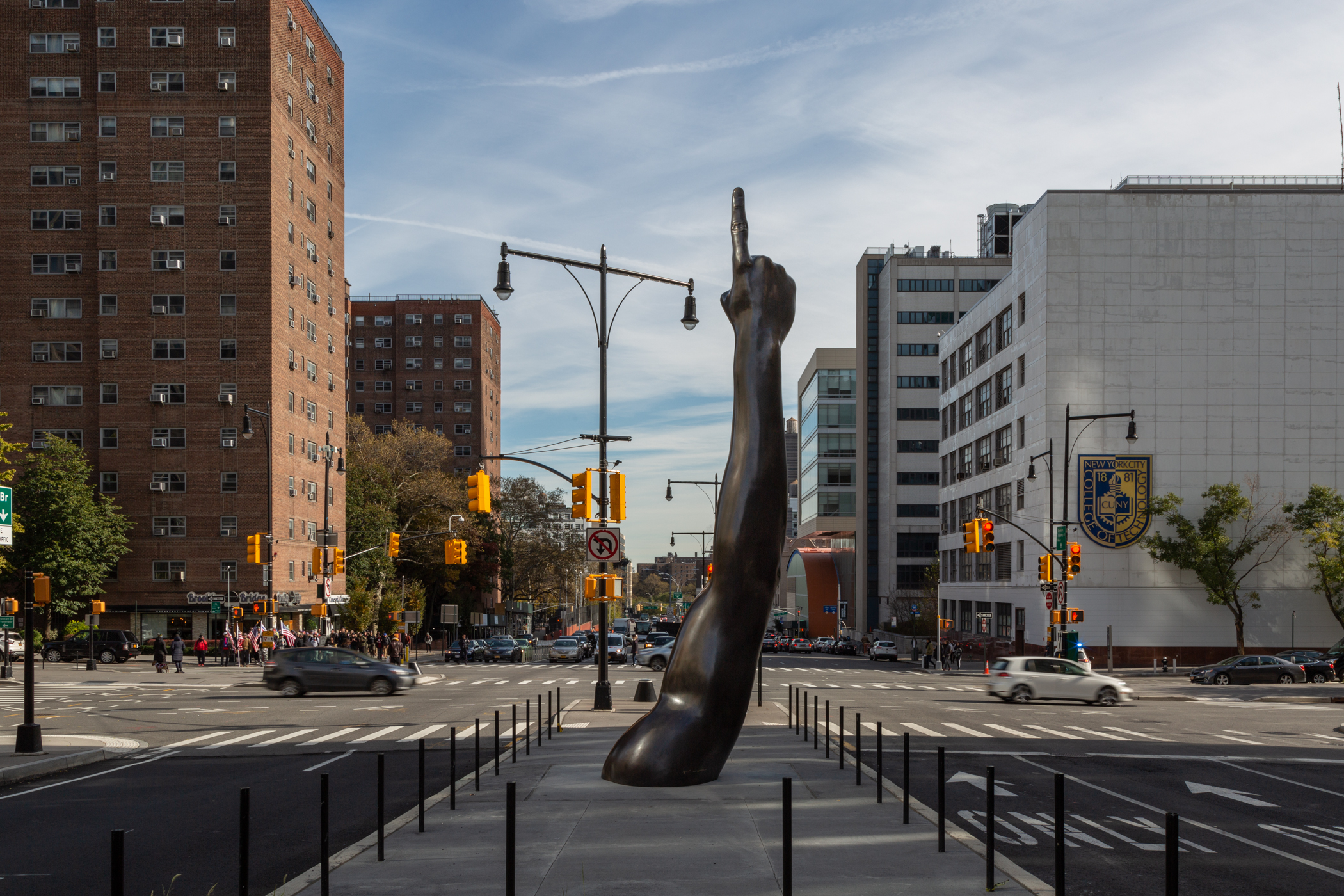 Just off the Brooklyn Bridge exit, a replica of NBA player Joel Embiid’s sinewy right arm juts from the concrete median and points to the sky at Tillary and Adams Streets. From shoulder to fingertip, the newly installed sculpture reaches 22.5 feet and, depending on whom you ask, is a testament to a borough that remains ambitious and independent despite its rapid change. The burnished bronze structure entitled “Unity” is among the most prodigious and permanent pieces in artist Hank Willis Thomas’ collection—one that has seen numerous expeditions into sculpture in recent years, including notable works “All Power to All People” and “Raise Up.”

For much of his career, Thomas, a Tisch alum and the son of Department of Photography & Imaging Chair Deb Willis, has worked as a conceptual artist using photography to confront themes of identity, race, and the effects of mass media. But “Unity” departs from the trenchant, even provocative expression of his prior work, instead favoring a celebratory and empowering mood. The sculpture has already attracted vague comparisons to a certain sister statue in New York Harbor, but Thomas himself is reticent to impart too much onto observers.

“I always learn as much from what people say about work as I do from what I say,” he says. “I sometimes worry that the author’s intent can get in the way of what might be deeper meanings and takeaways.”

Funded by the Department of Cultural Affairs Percent for Art program, “Unity” brings new life to an area at the threshold of Brooklyn that is still undergoing significant construction. We recently spoke with the artist by phone to gather his thoughts on what the sculpture means for today, and his own fascination with how that meaning will inevitably change in the years to come. 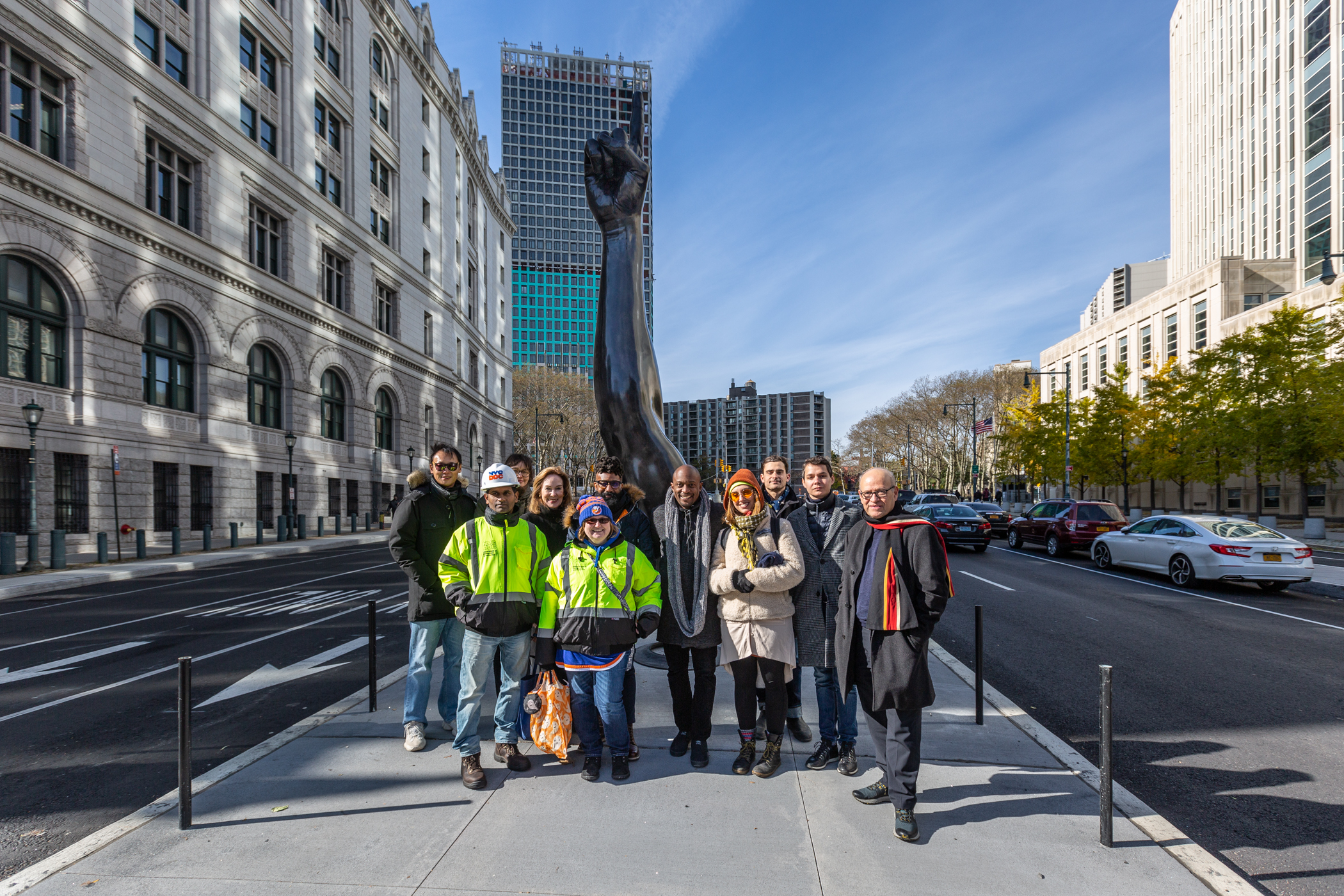 When developing commissioned work, how do you strike a creative balance between the proposal and your artistic interpretation? What does that line look like?

Is this the largest piece you’ve worked on?

And were there technical challenges that you hadn’t anticipated considering its size?

We tend to become preoccupied with artistic intent or meaning, even while understanding that it exists for individual interpretation. The title “Unity” says a lot on its own...

The sculpture is modeled after Philadelphia 76er Joel Embiid’s arm. How did he become involved in this piece?

HWT: I had a studio visit with some people and they saw that I was doing a sculpture, so I was doing molds and casts with body parts of NBA players. They were like, “Do you need anybody else?,” and I was like, “Sure!” Then they said, “Well there’s this kid, he hasn’t started playing yet, but I’m pretty sure he’s gonna’ be good. You should reach out to him.” And that was Joel Embiid.

You have this very special relationship with your mother, Deb. How does she continue to inspire you as a person and as an artist?

HWT: I think I often find myself subconsciously or inadvertently following in her footsteps. There are times when I think I’m doing things for the first time or in my own way, and I’ve come to a conclusion or an idea on my own, and in retrospect I realize I’m very much either doing something that my mother is also doing or recycling one of her ideas. It’s a kind of symbiotic relationship in a way.

It’s pretty rewarding. Sometimes we find ourselves in the same place without even trying.

< Previous From the Classroom to the Prison Cell, Anna Deavere Smith Gives Voice to the Forgotten Next > Highlights: Fall 2019