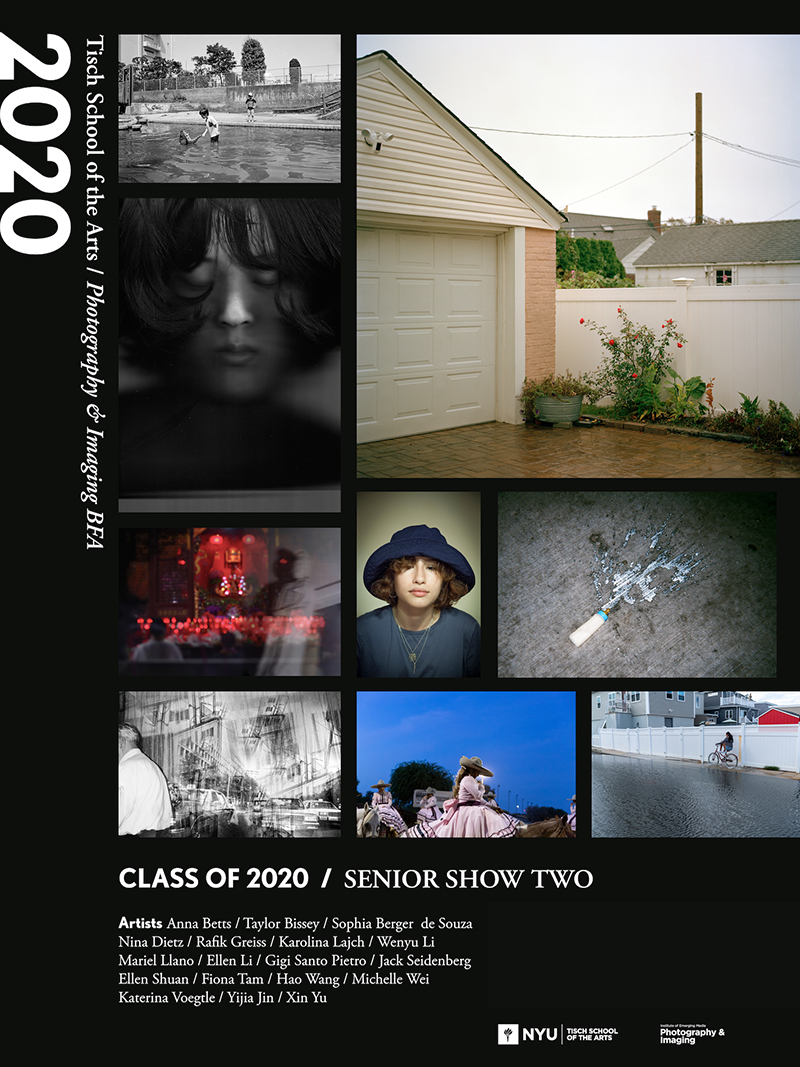 The opening of SHOW TWO in the DPI gallery spaces at 721 Broadway will be delayed due to University-wide precautions related to the transmission of COVID-19. We are committed to ensuring all our students are given the chance to exhibit the culmination of their years of hard work. To this end, we have drastically altered our gallery programming schedule to allow SHOW TWO to take place or bleed into the summer months (should this become necessary) to ensure that SHOW TWO gets equitable time in our gallery spaces.

While we can't say for certain when exactly SHOW TWO will open or close, we are still planning the same fanfare with which we present our other Senior Shows and look forward to scheduling a reception so all the students, family, and DPI community can celebrate our seniors' commitment, vision, and hard work.

We understand how difficult this news may be to hear and we are deeply sorry for the inconvenience this may cause for those planning to travel to New York for this event. Please follow this page or subscribe to our department's newsletter to receive updates.

Anna Betts: Due to the rise of social media, young people have become empowered to engage with political issues outside of the traditional realms, providing opportunities for new voices to be heard. Anna Betts’ project Love & Rage: The New Faces of Climate Activism focuses on the young climate activists who are at the forefront of the climate crisis movement and examines the relationship between social media and political activism.

Sophia Berger de Souza: Sophia Berger de Souza’s project Finding Sophie is an exploration of family and memory. It questions the narrative created for her great-great-grandmother who migrated from Brazil to New York City in 1915, leaving her children and home behind and thus becoming ostracized and excluded from family stories in the following generations.

Nina Dietz: Nina Dietz’s project New York Climate: 2020 is a call to action, documenting the urgent realities of climate change in often ignored regions of New York, in this case Staten Island and Queens. It demonstrates how, even in New York we are wholly unprepared we are to deal with the multifaceted threats of climate change.

Rafik Greiss: Rafik Greiss's project Matter focuses on the different definitions of the word ‘matter’: as substance and as significance. What does it mean to make photographs in an overly saturated image world? We live in an era where the lines between actuality and fabrication are not only blurred, but even the separation of the two are almost meaningless. For prior generations, matter means, for example: a tree outside; For millennials, there is very little space between matter as image and matter as substance. There is a new way of way of understanding reality, one through lens-based practice. What Rafik wants to introduce is the idea of images as a substitute for matter. It is less about particular objects, but more about the enquiry of the objects in one’s life and how they react together. There are no prepackaged deductions, in there lies a truth, but one that must remain unknown to the audience and artists alike.

Karolina Lajch: Karolina Lajch’s Pamiętasz? (Do You Remember?) is an exploration of the reliability of the human memory, specifically the unreliable nature of her own. Through these compositions Lajch creates new memories, or rather, new interpretations of her past, and attests to the murky and layered ways in which memory and artifacts operate.

Wenyu Li: Wenyu Li’s project Miles Away is dedicated to her father’s best friend’s family that has been taking care of her. It is not only a series to show her gratitude but also a project shines light on first/second generation Chinese Immigrants.

Ellen Li: Ellen Li’s installation folded as they are in homes is a litany for stillness. Fixated upon diaspora, queerness and femininity, it is a plea for the self and all its enumerations.

Gigi Santo Pietro: In Nameless Faces, Gigi Santo Pietro explores New York with her camera, presenting her encounters with people like a souvenir in a city with ever-transforming streets, style, and trends.

Jack Seidenberg: Jack Seidenberg’s Seven Stars is a collection of black and white street photographs of Tokyo, inspired by the isolation and emotional alienation found in Japanese literature.

Hao Wang: Hao Wang’s project Caged Freedom through extreme conditions and artistic expression discusses the fundamental value of freedom in human society. It draws the tension between nature and society.

Michelle Wei: Michelle Wei’s project Cycle investigates on the three stages in life repeating one after another, from knowing nothing to a period of conflict, and finally arrive at a stage of realization and peace.

Katerina Voegtle: Katerina Voegtle’s project Fatherland is an umbilical tug-of-war, an untangling and re-tangling of fraught relationships with father and with nation, exploring her own military family to see how the American national subject is created through pop culture mythologies and the family structure.

Yijia Jin: Yijia Jin’s project Every Breath You Take is a visual journal of self-exploration, selfcommunion and self-cure. It narrates a story of the organic body and nature.

Xin Yu: Xin Yu's project Things as I Remembered is about the artist's memories, documenting fragments of her life experiences, questioning the truthfulness of memories, and experimenting with how one can relive their memories through images. 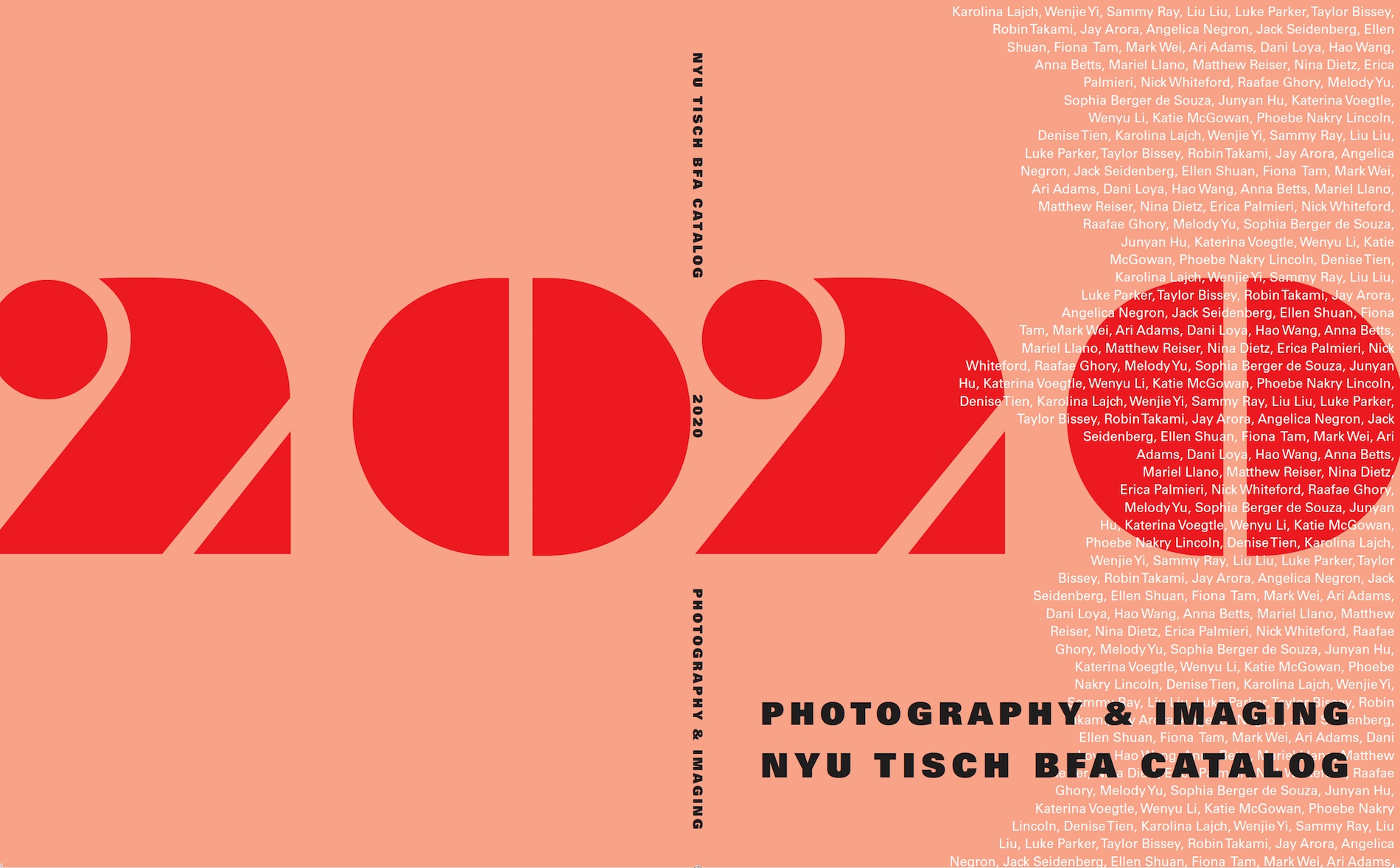