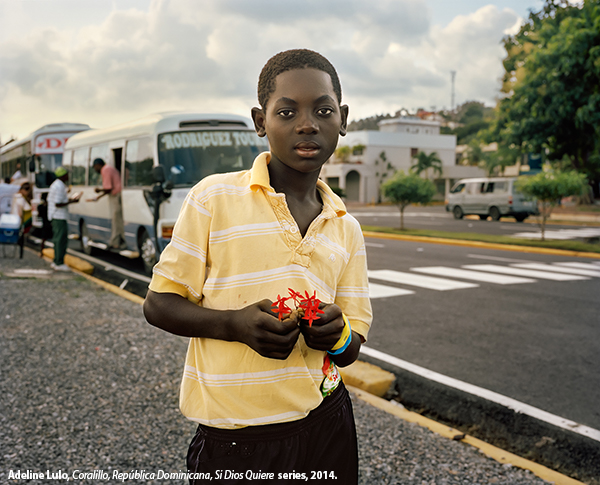 Opening Reception:
Thursday, November 17, 2016 from 6-8pm
Gulf + Western Gallery
721 Broadway (at Waverly Place)
This event is free and open to the public. No RSVP required.
Photo ID is required for entrance to all NYU buildings.

The current issue of Nueva Luz, highlighting the five awardees of En Foco’s 2016 Photography Fellowship, was the inspiration for this two-month exhibition, created especially for them, at the NYU Tisch School of the Arts’ Gulf and Western Gallery, beginning November 17, 2016. The “Fellows,” all New York City residents, will have their works on display through January 14, 2017. They are Anthony Hamboussi, Tommy Kha, Adeline Lulo, Danny R. Peralta and Lawrence Sumulong.

The opening reception will take place Thursday, November 17, 2016, from 6:00-8:00pm, at NYU Tisch School of the Arts’ Gulf and Western Gallery, 721 Broadway, in New York City. The exhibition is curated by Leenda Bonilla and on is view through Saturday, January 14, 2017.

En Foco, one of New York metropolitan area's leading clearing houses and supporters of photographers of color, is proud to have played an integral part this exhibition by its 2016 Photography Fellowship’s winners who are representative of our city’s diversity. En Foco’s Photography Fellowship provides each photographer with a $1,000 financial stipend, a group exhibition and a feature in Nueva Luz, En Foco’s photographic journal by photographers of color who probe the heart of humanity through their lens.

The En Foco Fellowship has been redesigned in order to broaden its reach and efficacy to core constituents. Its successes are predicated in building networks with citywide intermediaries and organizations like the Bronx Documentary Center, Harlem Arts Alliance, the Asian American Arts Alliance, P.R.I.D.A. and Amerinda. These networks ultimately generated 97 submissions for this year’s Fellowship, and the awardees were selected after three rounds of deliberations through a peer panel process.

The panelists are all distinguished members of the arts community: Leenda Bonilla, Bronx artist and photographer; Sarah Calderon, former Casita Maria Executive Director and currently Managing Director of Art Place; and Wendel White, professional photographer, cultural activist and museum educator. Each brought their significant experience in this process of supporting and advocating on behalf of artists of color, recognizing the contributions these artists make to their communities and to the art world as a whole.

Kimberly Rose, En Foco’s Online Fellowship Administrator and Layza Garcia, Programs Manager, managed the entire Photography Fellowship experience. They sustained En Foco’s commitment to excellence and integrity. Bill Aguado, En Foco’s Interim Director, stated, “we are committed to a system of providing financial support to our artists and we are fortunate to have two young professionals, like Kim and Layza, carrying on the tradition established in the mid-seventies by En Foco's founders.”

In Anthony Hamboussi’s Cairo Ring Road series, the photographer concentrates on the economic and environmental devastation in the construction of cities in the desert of Egypt. Although the people of Egypt are absent from these photographs, Hamboussi manages to create a narrative of the country and of the city of Cairo through a photographic exploration of the land itself. He illustrates the bleak and immoral neglect that is currently wrecking environment havoc on the land and reveals the fundamental cruelty of ecological devastation and a country in post revolutionary turmoil. Hamboussi’s photographs have been published in the New Yorker, Domus Magazine and The New York Times.

In today’s image-heavy culture, where Facebook and Instagram proliferate photographs at an increasing velocity, Tommy Kha creates photographs incorporating existing images through Google’s Reverse Image Search. These self-portraits question the actual existence of the image, and thus of the artist as well. Kha’s work speaks directly to the need for personhood and recognition, especially with his own experience as a son of immigrants, while growing up in the Southern United States. Born in Memphis, Tennessee, Kha has published photos in The Huffington Post, Slate and Butt Magazine. He has been exhibited internationally and holds a MFA in Photography from Yale University.

Adeline Lulo’s photo essay Si Dios Quiere, or God Willing, portrays the lives of families in the Dominican Republic, as well as Dominican immigrants living in the United States. Lulo’s own upbringing as a Dominican-American in Washington Heights, New York, inspired her to photograph her community in the Heights, as well as her family’s homeland in DR. Lulo beautifully depicts the tight-knit communities and cultures found in both of these places, especially evident in her photographs of homes, where children’s wide faces and living room walls full of family photos illustrate a sense of need, desire and hunger for life. Lulo earned a BFA from Parsons School of Design and has been honored by The New York Times. Lulo was the recipient of the William Randolph Hearst Endowed Scholarship.

Danny R. Peralta’s series ‘Bout That Life follows a young Dominican man as he navigates living and working as an undocumented immigrant in the Bronx. In each image, the subject’s face is slightly obscured, alluding to the thousands upon thousands of undocumented immigrants living in the United States, and their consistent marginalization from society. ‘Bout That Life tells a compelling story of life on the street, struggle and survival. Peralta is the Managing Director of The Point, CDC in the Bronx where he lives with his wife and two children.

Lawrence Sumulong’s series, Trapo could be described as reverse propaganda. The images of politicians and political posters from the Philippines, slowly deteriorating with age and wear, highlight the decline of trust the Filipino people have in their government officials and state sponsored programs. The disfigured images parallel the distorted words that come from government officials who continue to ignore the Philippines’ long history of brutal dictatorship. The images here bubble and congeal like a lava lamp, distorting and bringing contemporary Filipino life into focus. Sumulong’s previous work is included in the permanent collections of the Brooklyn Museum Library and New York’s Museum of Modern Art Library.

Leenda Bonilla is an interdisciplinary artist, creative placemaker, and community advocate. Her practice is influenced by her dual background (born in NYC, raised in the Bronx and Puerto Rico) inspired by social movements, feminism, and ethnography. Her visual art and installation/performance work has shown at Art in Odd Places, (NYC), AS220 (RI), The Bronx Museum of the Arts, El Taller Boricua (NYC), MOLAA (LA), among others. Leenda incubates relationships and projects that promotes resiliency in neighborhoods with organizations like the National Association of Latino Arts and Culture (NALAC), The Bronx Council on the Arts, Artisin, LLC. Currently at Partnerships for Parks, she supports and champions community leaders, artists and cultural organizations to care and advocate their neighborhood green spaces creatively in the Bronx.

Ms. Bonilla graduated with a Masters in Arts/Cultural Management with distinction and merit at the Pratt Institute, and is the alumni from the most recent cohort of the Coro Leadership NYC's 2014 Immigrant Civic Leadership Program. She earned a dual BA in International Studies/Political Science at Manhattan College. Her unorthodox arts education included intensive programs at Parsons, School of Visual Arts and the International Center for Photography and the Fashion Institute for Technology. www.leendabonilla.com

The En Foco Photography Fellowship is made possible with funds by the NYC Department of Cultural Affairs, the NYS Council on the Arts and the generosity of an anonymous donor.

Click here to learn more about the En Foco Fellowship.