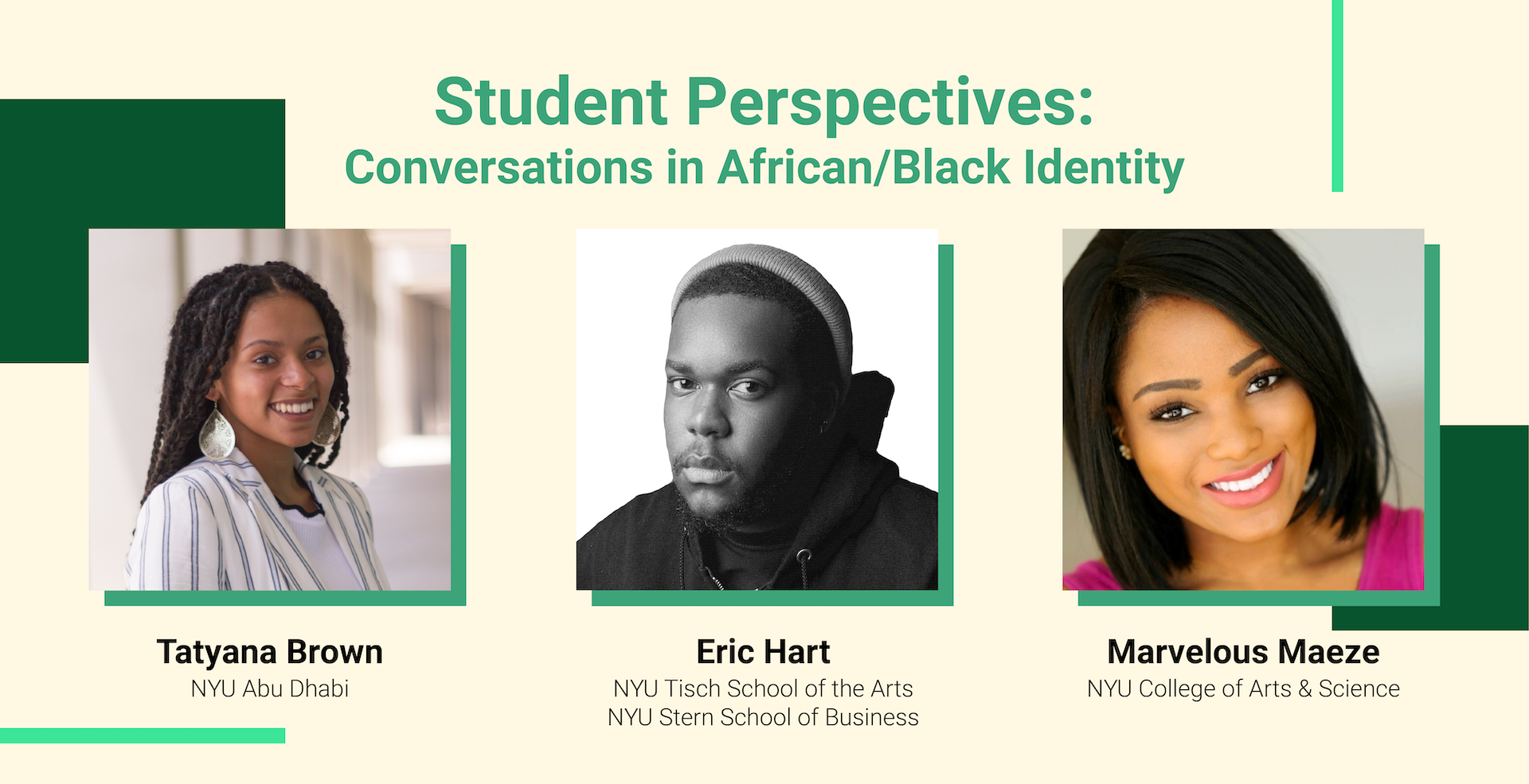 As part of a research seminar, this panel of NYU undergraduates will talk about race, ethnicity, and gender identity in today's world. Each student will share their diverse experiences in a ten-minute presentation on the seminar themes informed by coursework, research, and campus involvement.

"How are nationality and the specifics of distinctly diverse ethnicities and gender formations reshaping the framing of identity among first- and second-generation African immigrants and in their relationships with native-born U.S. African American populations in the 21st century?"

Tatyana Brown (she/her or they/them) is a third-year undergraduate student at New York University Abu Dhabi pursuing her bachelor’s degree in Social Research and Public Policy with minors in film and Africana studies. She was raised in the American South with Puerto Rican and African American heritage that she carries proudly and uses to inform her interest in global Blackness. Beyond the classroom, she draws joy from traveling the world, learning about freedom struggles and liberations of Black women and gender marginalized people. Her travels to over 20 countries inspired her to build a community that can be a hub for global Black women and gender marginalized people in Abu Dhabi, which encouraged her to co-found the community organization AZIZA during her freshman year of college. Today, AZIZA creates experiences, resources, projects and networks for over 130 Black women and counting. Additionally, she is a student activist working toward the institutional uprooting of anti-Blackness at NYU Abu Dhabi. Some of her ongoing projects include adding racial and gender-non-conforming categories to institutional data as a member of the Implementation Committee of Race, Diversity, and Belonging, building the first Black Student Union on campus, and introducing a Black feminist curriculum as a member of the Black Feminist Student Activist Coalition.

Eric Hart (he/him) is a Georgia native who is currently studying Photography & Imaging at NYU Tisch School of the Arts as well as ​minoring in Business​ E.M.T at Stern​. Hart’s photo work has been published on/in publications such as The Washington Post, Dazed, and The Root as well as featured in Photoville NYC and a recent Sprite Ad. Hart is a two time Gordon Parks scholar and NYU’s 2019 Diversity Art Festival’s student honoree. While occasionally working under Spike Lee or Justin Bettman, Eric is still a full-time student, he spends any extra time working on his creative brand, Love Hart. Created in the summer of 2018, Love Hart was developed with the purpose to raise awareness and further conversations about loving consciously through a wide range of artistic mediums. While Hart’s main focus is photography, he also is an editor and writer.

Marvelous Maze is a Nigerian-born and Texas-raised activist, entrepreneur, and creative who is a senior at New York University's College of Arts and Sciences. She is studying politics with a specilization in foreign affairs and International Relations. Her thesis ‘Immigration Nation: The Psychosocial Effects of Assimilation’ explores socio-cultural identity among first and second generation African immigrants as well as ethno-class structures within the United States. She is an Alt. Senator-at-Large for NYU’s Student Government and a Representative for black students and women of color campus-wide. She is on track to complete all four years of her university education in just two and a half years. Following graduation, she will be attending law school with the goal of becoming an international human rights lawyer. Outside of academia, Marvelous runs a non-profit organization that is currently building an orphanage for girls in her native Nigeria. Her long-term goal is to transform her non-profit into a globally recognized organization that raises capital for worthy causes in the fields of education and economic development as well as disease prevention and treatment.

Summer Sloane-Britt (moderator) is a first year PhD student at the Institute of Fine Arts, New York University. She researches representations of race in mid-twentieth century art of the United States, visualizations of labors, and photography.