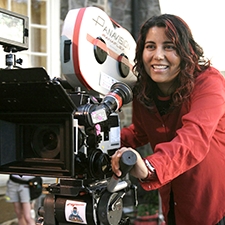 Writer/Director, Nisha Ganatra is an Emmy nominee and Golden Globe winner as the Director/Producer of Transparent. She recently sold a half-hour pilot based on her life to NBC/UTV with Amy Poehler producing. She is the Co-EP/Director of the first season of You Me Her, as well as the Co-EP/Director for the upcoming Louis CK and Pamela Adlon show, Better Things.

Her sophomore feature, Cosmopolitan starring Carol Kane and Roshan Seth, premiered at the South by Southwest Film Festival and was selected by Input as one of the top ten films shown on public television. It was the only narrative film chosen for this distinction.

Nisha has also been presented with Women In Film's Original Vision Award and was selected as one of Filmmaker Magazine's Indie Filmmakers to watch.