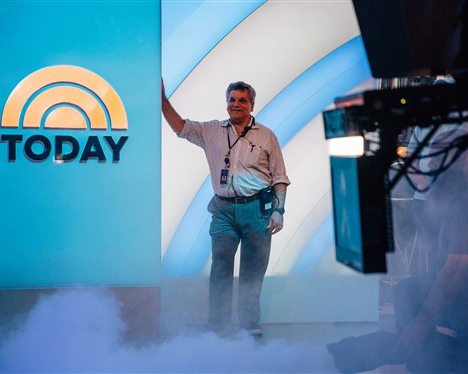 Mark Traub ’80 (Kanbar, Film & TV) was the beloved Stage Manager for The Today Show for 35 years. Before his time there, however, he was a student at NYU School of the Arts - named Tisch in 1982 after he graduated. A native of Queens, NY, Mark now lives in Pound Ridge, NY with his wife, Lisa ’80 (BFA, Kanbar, Film & TV) and their dog, Satchel.

After his retirement in January, Mark sat down with Alex Manges, Development Associate of Alumni Relations, to talk about what took him from Tisch to The Today Show, and how all the curveballs along the way added up to a life and career he’s proud of.

Alex Manges: Thanks for joining me here today, and congratulations on your recent retirement!

You were called “the heart and soul” of The Today Show, but before all of that you were a student at NYU Tisch (before it was called Tisch). What initially motivated you to apply to the school?

Mark Traub: Well, I knew I wanted to go to school for communications, which was how we referred to tv and broadcast studies back then. I wound up getting into NYU and Cornell and needed to decide if I wanted to live away from home (Cornell) or go to a more expensive school and live at home (NYU). Having grown up in Queens, I decided to go to Cornell but only spent one semester there.

Unfortunately, my father got sick soon after I left. I wound up transferring back to NYU to be at home after he passed away. I had luckily been granted a scholarship to NYU, and only missed half of the first year.

Though I had wanted to leave the city, NYU turned out to be the place for me. If you wanted to be in television and/or communications, NYU was the place. It was at the center of the broadcasting world - any other place you went to, you were starting outside of the city. When you started at NYU, you were starting in the city - you were there. You had already made the connection that takes people years to make!

AM: You had an incredible career following graduation. Can you take us through a timeline of how you got to your most recent position?

MT: Well, nine days after graduation, I got my first professional job. I had been a page for NBC while I was a senior at school (I don’t think NBC lets you do that anymore). I worked three days a week; one day with Saturday Night Live, and the other two doing whatever they needed me to do. I was also helping run the interviews for summer relief jobs - temporary positions to cover for people during the summer holidays. Nine days after graduation, and after nine months as a page, the woman who was running the interviews said: “Okay you’re doing your interview now.” She knew I had graduated from college and she was like “you’re going to need a job.”

I got two offers, one was to work in the engineering department (audio, camera-man work), the other one was being a stage manager! I knew that I wanted to direct, and stage managing was the route to directing. My first boss at NBC was an NYU alumnus! He said, “You’re a page? I was a page. You’re an NYU alum? I’m an NYU alum. I’m hiring you.” We had a great conversation, he hired me, and my career made it because I got that job.

AM: When did you start to work with The Today Show?

MT: Not for quite a while. I did A LOT of stuff before The Today Show; NBC Nightly News with John Chancellor, some soap operas, Texas, Saturday Night Live. The year I did Saturday Night Live it was Gilbert Godfried, Joe Piscopo, and Eddie Murphy. I think that may have been around the time he did “Hot Tub James Brown,” which was hysterical.

There was a writer’s strike in the Spring of ’81, and I was supposed to do a bunch of shows and they all got canceled. And you can’t do SNL without writers -- it would be very quiet. So I wound up going back to soaps for a while and then worked on a sitcom called One of the Boys.

It starred Mickey Rooney, and two young guys who, at that point, had never been heard of before - Nathan Lane and Dana Carvey. I’ll never forget bringing Dana to his first live show of Saturday Night Live, the one hosted by Tim Curry when he did a spot-on Mick Jagger impression. I remember turning to him and saying “Hey, you should be up there!” (meaning he should be on SNL). Sadly, I was not his agent. Afterward we met Nathan (Lane) at Don’t Tell Mama on W 46th Street, where he sang with Ernie Sabella, the original Timon and Pumbaa from The Lion King animated movie. What a night!

After One of the Boys, I worked as the Stage Manager of Letterman for four months, and on Christmas Eve I filled in as a temp for The Today Show. Due to budget cuts, I was told I was going to be laid off, so I worked from December 23 through the morning of Christmas Eve to get the overtime.

After about six weeks of not working much, I wound up at Good Morning America. Shortly after starting there, NBC called and asked if I wanted to come back for The Today Show - I said “yes please.”

It was supposed to be a one-month temporary position - it turned into 35 years.

AM: It seems like you did a fair bit of jumping around on your own in your early years. What motivated you to stay with the show?

It was comfortable, I was happy, it was a good time! I loved Bryant Gumbel, I loved Jane Pauley - people thought she was very staid and proper and I found out that she had one of the greatest senses of humor, she was hysterical - I loved Willard Scott, and I really got along with everybody. It was like I was adopted into this family.

I didn’t even HATE getting up really early in the morning! (It took a long time before I started hating it.)

Some of it I remember like it was yesterday. There were great moments - I think about 1987 standing on the Great Wall of China with Jane Pauley and Bryant Gumbel in front of me and thinking “...nobody’s ever done this before.”

AM: Was there an element of your time at Tisch that you think had the most profound impact on your life and career?

MT: The late, great Mark Chernichaw [Associate Professor of Film & TV] just passed away in December - I was his teaching assistant. We would finish the class - it ended kind of late on Monday nights - and we would just hang around a little longer to avoid the traffic home. We would talk about life and knowledge, and he and his best friend - David Sirota, who back then went by Bobby - they were new agey. Don’t forget, it’s the 70’s! This is Greenwich Village in the 70’s.

They always said, “it’s the process, not the product.” That guided me. It reminded me to make sure that I always welcomed newcomers into our group because they were now part of the process. From the moment I was in a position to be in charge of people, it was the way I operated. Make new crew members feel welcome, make them feel at home.

AM: That quote - “It’s the process, not the product,” sounds like it was very impactful for you as a young student, and a young professional entering a career that involved a lot of trial and error.

AM: Your wife Lisa is also a Tisch alumna, is that right? How did you two meet?

At the time, registration day, everybody would get on line (stand in line) to get a professor to approve a schedule for you. The computer at the time was a card reader. Mr. Jobs was five years away from his Apple 2 - this was 1978. Lisa was in front of me and we started talking and ended up running into each other four times in the same day. Then we wound up sitting next to each other in one of the classes. So, it was kismet!

AM: You’ve seen television go through so many changes and new formats in your life and career. What would you say has been one thing that has remained the same through the shifting landscape?

The people who are great broadcasters are few in number, (editor's note: Mark adopts an Obi-Wan Kenobi voice) “but they’ll soon be back and in greater numbers!”

But in all seriousness, there are few who can do it very well. Bryant Gumbel was born with a time clock in his head. I could tell him to wrap up a weekend of golf in 13 seconds, and he would do it *boom* to the second, with something amazing and beautiful, on the spot.

A person like that is amazing. I love Jane Pauley’s delivery, and I was with her as she grew into the amazing broadcaster she is now, which was such a fun thing to be part of.

AM: If you could go back and talk to yourself on your last day at NYU, knowing what you know now, what would you say to younger Mark?

Hmm… what would I tell myself…?

You know, there’s going to be a lot of stuff that’s going to happen that’s not going to be that great. The overall has been incredible. I have had a fabulous life - (editor's note:  Mark adopts Jimmy Stewart accent from It’s a Wonderful Life) “I don’t need Clarence the angel to help me after I’ve fallen into the river!”

There’s going to be a lot of stuff that you’re going to go through that won’t be fun. But you’ve just got to keep going. Don’t let the sad things stop you. Eventually, if you’re strong, things will turn out the way you hope.

When you do two hours of live TV every day, you’ve just got to keep going. No matter what happens - you’re live!