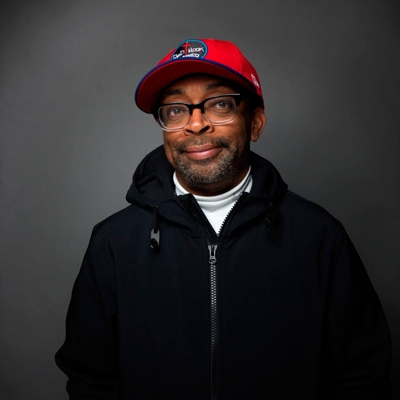 Writer, Director, Actor, Producer, Author, and Educator, Spike Lee is widely regarded as one of the premier African-American filmmakers who helped revolutionize Modern Black Cinema and is a forerunner in the 'do it your self' school of Independent Film. His current production, Chiraq, shot on location in Chicago, was written by Lee and Kevin Willmott based on the Greek comedy Lysistrata by Aristophanes. In 2014, he released his Kickstarter funded Da Blood of Sweet Jesus. Prior to this, was the release of Red Hook Summer, the reinterpretation of the Korean Psychological Thriller Oldboy, and Mike Tyson Undisputed Truth, a recording of Mike Tyson’s Broadway show. Lee continues to create cinematic works of art for which he is well known, such as When the Levees Broke, his most recently critically acclaimed film, that was a huge success receiving awards from film festivals world wide. Other critical and box office successes have included such films as Inside Man, 25th Hour, The Original Kings of Comedy, Bamboozled, and Summer of Sam. Lee's films Girl 6, Get On the Bus, Do the Right Thing and Clockers display his ability to showcase a series of outspoken and provocative socio-political critiques that challenge cultural assumptions, not only about race, but also class and gender identity.


His debut film, the independently produced comedy She's Gotta Have It, earned him the Prix de Jeunesse Award at the Cannes Film festival in 1986 and set him at the forefront of the Black New Wave in American Cinema. His second feature, the very profitable School Daze, helped to launch the careers of several young Black actors including Laurence Fishburn while his 1989 film, Do the Right Thing, garnered an Academy Award nomination for Best Original Screenplay and Best Film and Director awards from the Los Angeles Film Critics Association.  Lee's Jungle Fever, Mo'™ Better Blues, Clockers, and Crooklyn were also critically well received.  His epic drama Malcolm X, starring Denzel Washington, received two Academy Award nominations.

Born in Atlanta, Georgia, and raised in Brooklyn, Lee returned south to attend Morehouse College. After graduation, he returned to New York City to continue his education at New York University’s Tisch School of Arts in Manhattan, where he received his Master of Fine Arts Degree in Film Production. After graduation, he founded 40 Acres and a Mule Filmworks, based in Brooklyn.

In addition to his film achievements, Lee has produced and directed numerous music videos for diverse artists including Chaka Khan, Tracy Chapman, Anita Baker, Public Enemy, Bruce Hornsby, and Michael Jackson. His other music videos include work for the late Miles Davis and Phyliss Hyman, Naughty by Nature, and Arrested Development.

Lee has also produced numerous documentaries and sports programs. For HBO, he completed the Peabody and Emmy Award winning films When the Levees Broke: A Requiem in Four Acts and If God is Willing and da Creek Don’t Rise which revisits the storm-ravaged Gulf Coast region as residents attempt to rebuild in their cities while also demanding assistance and accountability from their political leaders, as well as the Academy Award nominated 4 Little Girls for HBO. He received an Emmy Award for his piece on Georgetown's John Thompson for HBO/Real Sports. An avid Knick fan, in January 2014, Spike began hosting a 1-hour bi-weekly sports-talk show, Spike Lee’s Best Seat In Da House, featuring discussions on various news and topics concerning basketball and the NBA.

Additionally, Lee has authored seven books on the making of his films. The fifth book, Five For Five, served as a pictorial reflection of his first five features. He then followed up with Best Seat in the House, co-authored with Ralph Wiley. Lee and his wife Tonya Lewis Lee co-authored two children's books entitled Please, Baby, Please and Please, Puppy, Please. In 2005, he authored a retrospective book about his film career entitled That's My Story and I'm Sticking To It.

Ever moving into new areas, Lee combined his extensive creative experience into yet another venture: partnering with DDB Needham, he created Spike/DDB, a full-service advertising agency.

Lee began teaching a Course on Filmmaking at Harvard in 1991 and in 1993 he started on the faculty at New York University’s Tisch School of the Arts in the Graduate Film Program where he received his Master of Fine Arts and was appointed Artistic Director in 2002.