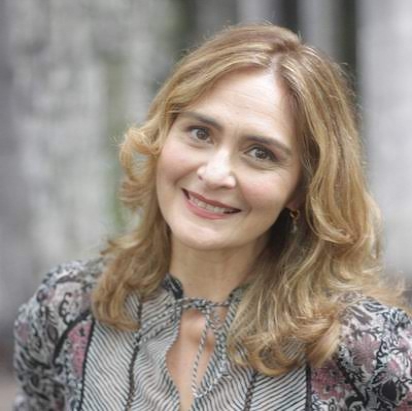 Cusi Cram is a playwright, screenwriter, director, and an advocate for women in the arts. Her plays have been produced by: Primary Stages, LAByrinth Theater Company, The Denver Theater Center, Princeton’s Lewis Center for the Arts, The Williamstown Theater Festival, South Coast Repertory, The Atlantic Theater, Cornerstone Theater Company, New Georges, and on stages large and small all over the country.

Her work has been supported with residencies, grants, and fellowships from The O’Neill Theater Center, The Bogliasco Foundation, the Camargo Foundation, Space on Ryder Farm, The Herrick Foundation, The Fornes Institute, The Ford Foundation, NYU’s Global Research Institute in Madrid, and the Venturous and the Stillpoint Funds. She is also 2019 E.S.T /Sloan Grant recipient. She was commissioned by NYSCA in collaboration with Rattlestick Theater for her play, Novenas for a Lost Hospital, which examines the closing of St. Vincent’s Hospital in New York’s West Village. It will be presented as part of Rattlestick’s 2019 season starring Kathleen Chalfant. Cusi has an ongoing practice in writing for/about/with community and is committed to merging local issues into theatrical forms.

Cusi was a long-time writer on WGBH’s children’s program, Arthur for which she has received three Emmy nominations. She also worked as a writer on Showtime's The Big C, starring Laura Linney. She's written on television shows for both kids and adults which have aired on, Amazon, PBS, and the BBC. She directed her first film, Wild and Precious, through AFI's Directing Workshop for Women where it won The Adrienne Shelly and Nancy Mallone Awards and played at over twenty festivals nationwide.

Cusi  sits on the board of the Leah Ryan Fund for Emerging Women Writers and is a member of New Georges’ Kitchen Cabinet and Labyrinth Theater Company. She is the former Director of Outreach for the Lilly Awards Foundation, which honors notable women in theater and seeks to shine a light on issues surrounding female theater makers. She has taught at Fordham, Columbia University, and Primary Stages Einhorn School of the Performing Arts, where she was honored for her dedication to the school and its students. Cusi is a graduate of Brown University and the Lila Acheson American Playwright’s Program at Juilliard.