Our Lives, Our Vote 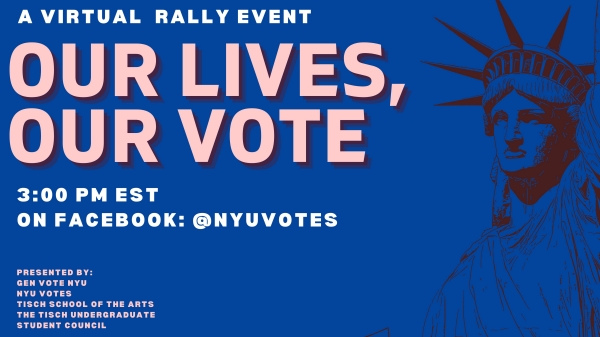 Our Lives, Our Vote is hosted by GenVote@NYU and the Tisch Undergraduate Student Council to help inspire our classmates to get out the vote. We’re bringing together leading voting advocates and performers to this virtual voter rally. Come together alongside notable NYU Alumni to harness the power of our vibrant NYU community!

Join us this Saturday, October 24th at 3 pm for a virtual voting rally to hear why NYU students and alumni are voting, how organizers are getting out the student vote, the importance of youth voter engagement, and how you can cast your ballot during COVID-19!

Brianna is the Director of Organizing and Partnerships for Voto Latino. She was born and raised in El Paso, Texas, where she first became acquainted with community issues and their connection to voter apathy. This interest led her to become one of the youngest Hispanic women in the nation to manage a U.S. Congressional race in her home district, at the age of 21. Carmen later worked on Beto O’Rourke’s historic Senate race in Texas, engaging tens of thousands of Texans. She has maintained her passion for connecting voters with opportunities to exercise their voice at Voto Latino. Her current work at VL focuses on building up the organization’s volunteer network, encouraging individuals to advocate for their communities at the local, state, and national level. She also builds partnerships and coalitions with civic groups and businesses who are ready to engage and mobilize Latinx voters.

Jarret Berg is a New York attorney with a passion for protecting and advancing civil and political rights. In 2019, Berg co-founded VoteEarlyNY to ensure that the voter access reform policies he helped design and enact would be implemented responsibly across the New York City and State. Apart from his passion for modernizing the way in which elections are conducted in America and eliminating unnecessary barriers to political participation, Berg closely follows developments in U.S. foreign policy, international law, and human rights. Prior to returning to his New York roots in 2011, Berg studied international law in the U.K. and worked in The Hague, where he clerked for the Chambers of the International Criminal Court.

Disha is the Director of Digital Media and Strategy for GenVote. She is passionate about effecting change through the immense power of social media platforms. Her awakening for social justice arose when she joined The Justice League in high school. As President of the school club and an intern of the Town of North Hempstead Community Services, Disha worked on various issues including bullying. In 2011, she co-founded the Annual Bullying Awareness Walk involving all school districts in the Town of North Hempstead. She was recognized and awarded for her efforts in 2013 by former Nassau County's District Attorney, currently U.S. Representative, Kathleen Rice. Disha graduated from New York University majoring in Creativity, Innovation, and Social Entrepreneurship.

Cristina works at the intersection of Latinx politics and political theory. Her work has appeared in Political Theory, the Du Bois Review, Aztlán: A Journal of Chicano Studies, Political Research Quarterly, and various edited volumes. She is currently the co-editor of Theory & Event, a peer-reviewed journal that publishes work by scholars working at the intersections of political theory, cultural theory, political economy, aesthetics, philosophy, and the arts. She is also an occasional guest on MSNBC.