'You Can Still Smile': A Conversation with Gov. Cuomo’s 'Wear a Mask' Contest Finalists 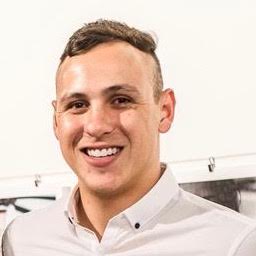 Still from "You Can Still Smile"

NYU Tisch alumni Emory Parker and Natalia Bougadellis were set to plod away at their debut feature film this past spring. But like most of 2020, destiny had other ideas.

As the COVID-19 pandemic took a vise-like hold of the world, Parker and Bougadellis found themselves searching for light in the dark days of quarantine. The source, as it turns out, would come from their fellow New Yorkers. After stumbling upon New York’s “Wear a Mask Ad Contest” via Instagram, the directing and writing duo submitted a 30-second spot last April, eventually placing second among a pool of 600+ submissions. “You Can Still Smile” is a brief but heartening montage of mask-wearing New Yorkers describing the families, friends, and community members for whom they wear a mask. It’s a delicate and relatable reminder that the more we do now to protect one another, the sooner and more safely we can get back to being with one another.

Parker and Bougadellis are 2017 and 2016 graduates, respectively, of Tisch’s Kanbar Institute of Film & Television, where they previously collaborated and set the stage for their work as part of Blue Slate Films. Watch “You Can Still Smile” below and learn more about this team’s creative synergy and their filmmaking plans for a post-pandemic future. 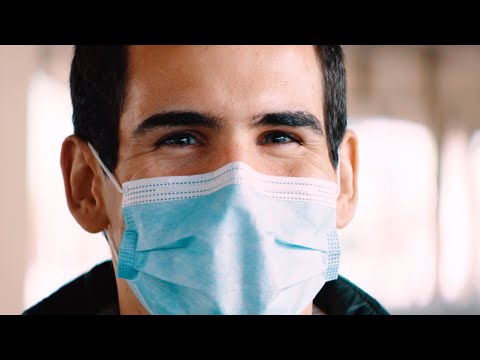 You Can Still Smile | #NewYorkTough

How did you first hear about the “Wear a Mask” contest, and why did you feel compelled to get involved?

Emory Parker: I actually saw this campaign on Instagram, and we really hadn’t been doing that much production because everything has been on hold during the pandemic. We saw this and were really inspired to tell a story in this very short amount of time and spread this really wonderful message. We thought it was a great challenge for us.

What were some of your early creative conversations that led to the direction and ethos we see in “You Can Still Smile”?

Emory Parker: The way that we come at our projects, most of it is a very intense collaboration between the two of us. Natalia is a DP, I’m an editor, and we’re both writer-directors. We are very image-based, and I had the original image of people looking up slowly at the camera with their masks on to be able to see their eyes and hear their voices. And then Natalia came up with the great idea of being able to see people smile—that you can actually still see someone smile through their mask.

Natalia Bougadellis: ...Yeah, you can see their eyes brighten up when they smile.

It’s well-documented that certain demographics are particularly vulnerable to COVID-19, but this virus doesn’t discriminate. How did you find your subjects and ensure the PSA reflected the diverse impact of the pandemic?

Natalia Bougadellis: Almost everyone in the video is our friend, or we know them from someone. It wasn’t completely strangers.

What did the production timeline look like for such a timely and urgent piece like this one?

Emory Parker: The deadline was very short. It was about a week from when they announced it to when the contest closed. So we shot it in a matter of days—drove around New York and collected these responses. And we edited it also in a few days, so really a short amount of time that we got this together.

Natalia Bougadellis: And obviously as we were filming we were keeping six feet of distance, we were wearing masks and gloves, and trying to make everyone comfortable and everyone feel safe while doing this.

What are some of the other ways that you’ve been able to channel your creativity and find outlets during this quarantine?

Emory Parker: It was a bit disappointing at first because we were preparing to shoot our first feature film in April, and sadly had to postpone. We had a lot to deal with in cancelling that and letting everybody know, but we’re still inspired to create other work. We have a lot of equipment at home, so we started a series where I interview experts, artists, and entrepreneurs, about what they are doing in their respective fields and how they can make a difference. I’ve found that to be a really fulfilling experience.

Natalia Bougadellis: Another thing that has been keeping us busy is updating our website, uploading our most up-to-date reels… The website is still a work-in-progress, but it’s a good time to try to build on our company and ourselves. Once this is over we can hopefully get right back into starting to work again.

How did you come together to establish Blue State Films, your co-founded production company?

Natalia Bougadellis: We met at NYU at Tisch during undergrad, and we were working together at school through all the duration of our studies. The summer after we graduated we filed for an LLC and set up the company and joined forces officially to do this.

We’ve been doing a lot of branded content for a lot of internal videos, some social media videos, and we try to do a wide variety of things and stay creative through it all.

Emory Parker: We’ve been hired to do numerous productions where an actor or writer will come to us and have us direct a spot or direct a piece they have written, which is really great for us as we build our company and our portfolio. We also try to promote stories that feature women and LGBTQ characters or subjects. That’s very important to us as female business owners.

Any last thoughts or words of hope for the Tisch community during this time?

Emory Parker: I would just say that when we graduated from Tisch we didn’t know exactly what our path was. A lot of my friends were going to work at big companies and it was definitely a risky move to start our own company. But I think if you put in the work and the time, Tisch graduates are really capable of a lot and have the potential to do this kind of work.

< Previous COVID-19 CALL TO ACTION Next > Eric Hart Jr. Recreates an Iconic Wartime Poster to Spur the Fight Against Racism