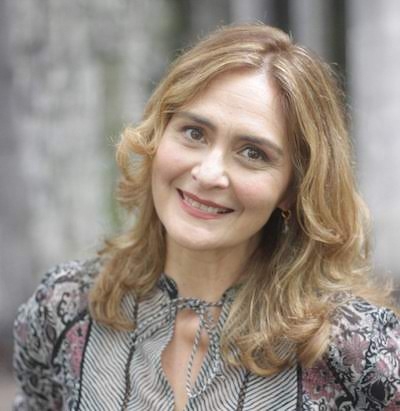 Please join us in welcoming Cusi Cram the next Associate Chair of the Dramatic Writing Department, joining Joseph Vincuguerra in an important leadership role in the Fall 2021 semester.

Cusi has been an Assistant Arts Professor in the department since 2016 and has become a vital and influential member of the dramatic writing community. Among Cusi's various roles as Associate Chair, she is going to focus her passion and energy toward rebuilding and developing our department community, something that has never been more important after such a trying year. She will work with students, faculty, staff, and alumni to create opportunities for engagement, within and outside of our department. She will continue to teach and advise students in her brilliant way.

Cusi Cram's plays have been produced by LAByrinth Theater Company, Primary Stages, The Denver Center, South Coast Repertory’s Hispanic Playwrights Project, The Williamstown Theater Festival, The Atlantic Theater Company, Cornerstone Theater Company, Princeton’s Lewis Center for the Arts, New Georges, and on stages large and small all over the country.
Cusi has a long-time obsession with how to make theater about New York for New Yorkers. In her work she often uses the city as both a stage and source of historical inspiration. She has created two different dramatic walking tours of the city which were supported by the Ford Foundation and the Stillpoint Fund. She is a 2018 recipient of a NYSCA commission in collaboration with Rattlestick Theater for her play, Novenas for a Lost Hospital, about St. Vincent’s Hospital in New York’s West Village. Novenas premiered at Rattlestick Theater for a sold out run in the fall of 2019 directed by Daniella Topol, and starred Kathleen Chalfant. That play fulfilled Cusi’s life-long wish of moving a play in and out of a theater.

Cusi wrote for many years on the PBS children’s program, Arthur for which she received three Emmy nominations. She is currently a writer on the Peabody-award-winning show, Molly of Denali and the upcoming, Wombats. She also worked as a writer for several seasons on Showtime's The Big C, starring Laura Linney. Additionally, she’s written on television shows for both kids and adults which have aired on Amazon, PBS, and the BBC. She directed her first film, Wild and Precious, through AFI's Directing Workshop for Women where it won The Adrienne Shelly and Nancy Mallone Awards and played at over twenty festivals nationwide.
Cusi is a member of LAByrinth Theater Company and sits on the board of Rattlestick Theater and the Leah Ryan’s Fund for Emerging Women Playwrights and is the former director of outreach for the Lilly Awards, which honors female identified theater makers.