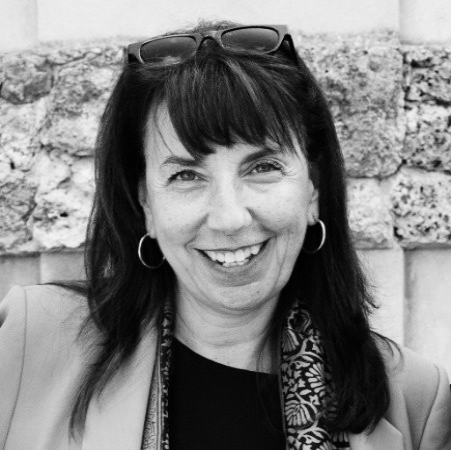 Ellyn Toscano is New York University’s Senior Director for Programming, Partnerships and Community Engagement in Brooklyn. In this position, she is charged with fostering programming partnerships at the intersection of technology, new media and the arts, and establishing new programming and strategic partnerships with Brooklyn’s civic, cultural, business and educational communities.

Before assuming these duties, Toscano was Executive Director of New York University Florence: Director of Villa La Pietra, a 15th century villa and historic garden that houses a collection of six thousand objects dating from the Etruscans to the 20th century, and the founder and Producer of The Season, a summer festival that assembles artists, writers, musicians and public intellectuals to produce new works or reinterpretations of classics  in the Villa’s Renaissance revival gardens. She founded and directed La Pietra Dialogues, a year-long series of conferences, talks and exhibitions on a wide array of cultural and political topics. She is the co-editor of Women and Migration: Responses in Art and History, a volume that resulted from a conference on Women and Migrations, organized in Florence in 2016.

Before arriving at New York University Florence, Ms. Toscano served as Chief of Staff and Counsel to Congressman Jose Serrano of New York for two decades, was his chief policy advisor on legislative, political and media concerns and directed his work on the Appropriations Committee. Ms. Toscano also served as Counsel to the New York State Assembly Committee on Education for nine years.

Toscano serves as a commissioner of the New York City’s Commission on Gender Equity, a member of the boards of the National Parks of Harbor Conservancy of NY and Friends of FAI (Fondo Ambiente Italiano),  an Advisory Board member of both the John Brademas Center and Civitella Ranieri Foundation and served on the boards of the Bronx Museum of the Arts and the Brooklyn Academy of Music (as the representative of the Brooklyn Borough President).

A lawyer by training, Ms. Toscano earned an LLM in International Law from New York University School of Law.