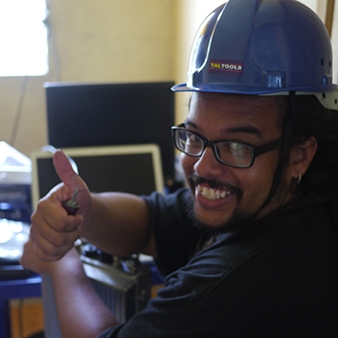 Edwin Reed-Sanchez is the founder of SayCel, a company that implements low cost communications infrastructure solutions in developing regions.  Currently SayCel operates a network on the Caribbean Coast of Nicaragua, and won the 2015 Stern Berkeley Social Venture Award.  His work in communications technology grew out of research started at ITP’s Tower of Power class, and low cost GSM technology became the focus of his thesis.

Edwin and his research group at SayCel is funded by the RiskEcon Lab at NYU’s Courant Institute, and they focus on open source development of cellular solutions. SayCel held a hackathon at Courant, where they collaborated with members of Rhizomatica, a Mexico based non-profit running 16 indigenous community networks, and with FreeRadio Brazil.  SayCel is also active member in the Telecom Infra Project, a Facebook initiative that aims to reimagine the deployment of communications infrastructure.

Edwin is also the New Technology Manager at Robofun, a company that provides technology and robotics classes to kids at over 100 schools through out the NYC.

Prior to graduating from NYU ITP, Edwin managed Bluefield’s Sound System, a non-profit multimedia resource center in Nicaragua that received funding from the UN, USAID, and UNDP.