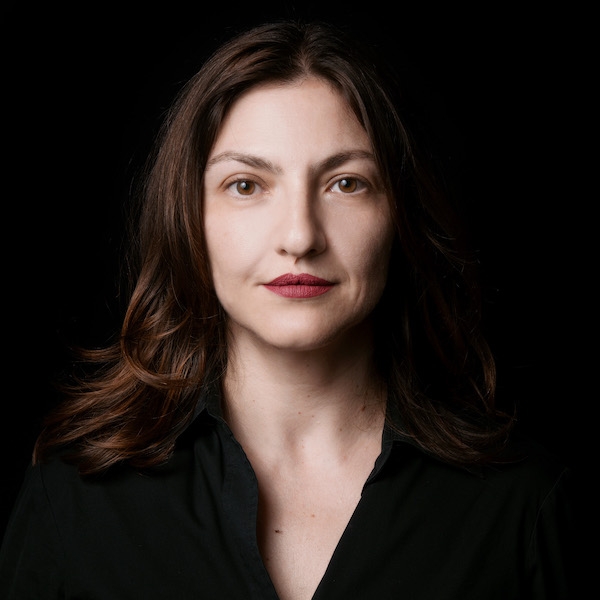 Kat Mustatea is transmedia playwright and artist whose language and performance works enlist absurdity, hybridity, and the computational uncanny to dig deeply into what it means to be human. She has written plays in which people turn into lizards, a woman has a sexual relationship with a swan, and a one-eyed cyclops tries to fit into Manhattan society by getting a second eye surgically implanted in his head.

Her TED talk, about puppets and AI, takes a novel approach to the meaning of machines making art. She is currently an Artist in Residence at Harvestworks Digital Media Arts Center, a member of The Orchard Project’s 2022/23 Greenhouse Lab, a project fellow at NYU’s ITP/IMA Program, and a member of ONX Studio. Her most recent hybrid work, Voidopolis, is forthcoming in 2023 from MIT Press as an augmented reality book. The work previously won the Arts and Letters Unclassifiable Prize for literature and the Dante Prize for art, and has been exhibited internationally in a variety of digital and physical formats, including at Ars Electronica. Her mixed reality play, Lizardly, premiered at MAXLive: The Neuroverse, co-produced by New York Live Arts, and was named among the Digital Dozen Breakthrough In Storytelling Awards from Columbia’s Digital Storytelling Lab.

Mustatea is currently developing augmented languages that express impossible states of transformation and hybridity. Most recently, she worked with augmented AI text generators to explore sonic and meaning effects of specific constraints on language. In one example, she developed a distinctive mode of speaking for a human in the act of transforming into a cat; and another, contrasting mode of speech for a human turning into a lizard. She is interested in connecting spoken language and movement language for live performance in striking ways—in the tradition of Bill T. Jones. Increasingly, her methods involve emergent technologies.