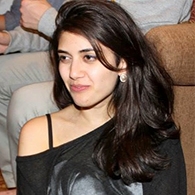 Logline: In a world where false memory implantation has become a growing business, a neuroscientist turned memory technician sets out to find a cure to Post Traumatic Stress Disorder. In order to fund his research, he sells illegal and violent memories to a man who turns out to be more than just an adrenaline-seeking customer.

Bio: Hennah graduated with a BFA in Dramatic Writing in May 2014 where she received the 2014 Venable Herndon Award for Excellence in Screenwriting. She was recently awarded the WGA Michael Collyer Memorial Fellowship in screenwriting to pen her script 48 Hour Fire which follows three people as they struggle to survive the most tumultuous hours of the 1992 Los Angeles Riots.  She is currently looking for freelance work as an editor, writer, and/or script analyst. Collaborations are welcome.