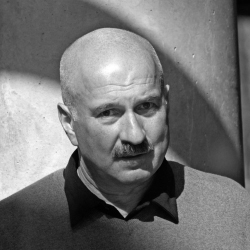 Writer, Director. At the Leningrad Film Studio, Lenfilm, directed feature films A Diary of a School Principal (1975) and A Melodrama of One Family (1976). His third film, The Errors of Youth (1978), was banned by Soviet censors. In 1989, was invited to Leningrad to finish The Errors of Youth. It was shown at the New Directors, New Films Festival at the Museum of Modern Art in New York. It was also part of Un Certain Regard at the Cannes Film Festival in 1989 and was screened at theLondon and Edinburgh Film Festivals. In 1991, scripted, coproduced, and directed the feature film Black & White. It was shown at Sundance Film Festival, Utah; Rimini Film Festival, Italy, where it received second prize; and Mannheim Film Festival, Germany, where it received the Public Prize. In 1993, scripted and directed the feature film Viva Castro! Currently shooting (directing and co-writing) TV movie "Undecover" for Russian TV, also starting June - in pre-production for feature film "Crime and Weather" NTV-production (writer-director).